I’ve had this recipe floating around in draft form for a while, but was having trouble finding a way into it. I mean, it’s delicious, and I think sincerely that you’ll like it a lot, but sometimes it’s hard to find something interesting to say beyond “bon appétit!” Recently, though, the weather’s turned rather hot in Ohio, and I’ve had multiple friends come seeking advice on what they can make that’s filling, but also doesn’t require them to heat up their kitchens any more than absolutely necessary.

Well, okay then. This: you make this. Yes, you have to heat up a pot of water on the stove to cook the pasta, but that is absolutely it, as far as cooking goes. And it makes a nice big batch, so if you heat up your kitchen just a little bit on one evening or morning, you’ll have a quick, easy meal for days to come. 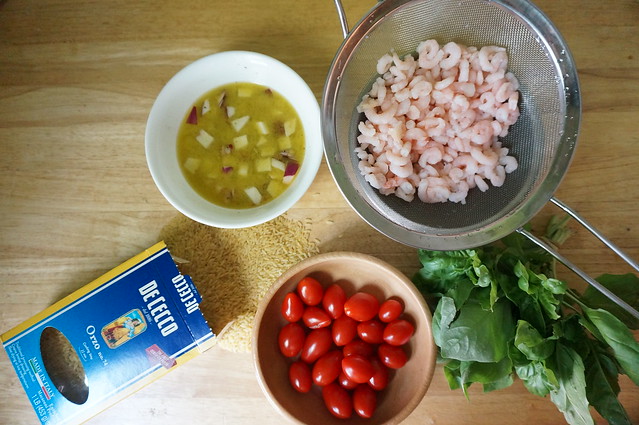 But enough about the hot-weather mechanics of it: you should make this even if it’s cool and pleasant where you are, because it’s absolutely delicious. And no one should be surprised by this, given this dish’s parentage. I’ve been making the source recipe, a Martha Stewart recipe involving canned tuna and raisins, for a good while now, and it’s rock solid. Say what you will about The Martha, she does not mess around when it comes to recipe testing. But the other side of this salad’s heritage is the delicious flavors of summer. Stewart’s recipe, with its canned tuna and dried fruits, is very much a wintery recipe, perfect for lightening up your diet when there’s still a chill in the air (or for that matter, snow on the ground). In my recipe, though, I’m taking advantage of the summer growing season and swapping in the classic combination of tomatoes and basil, along with some cool, sweet shrimp. If you like Caprese salads, but are baffled as to how some people manage to survive on them, this is for you especially: same idea, but actually filling.

So what are you waiting for? Have a nice salad and enjoy the sunshine. Oh, and: “bon appétit!” 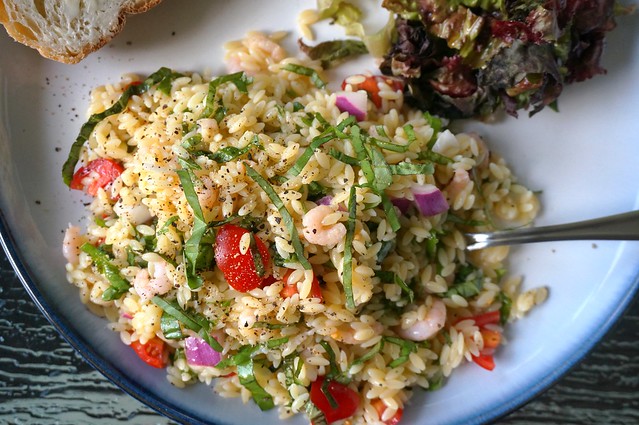 Orzo salad with shrimp and basil

This recipe would be delicious any time of year, under any weather conditions: let’s just be clear on that. But especially in the late days of summer (when the thought of heating up your kitchen is just excruciating) cool, filling salads are a godsend. And when they’re as flavorful as this one — shrimp! basil! tomatoes! it’s almost a caricature of summer! — it’s no sacrifice at all.

10 oz frozen cooked salad shrimp (or another larger size, which you’ll cut up)

Set a large pot of lightly salted water, covered, over high heat. You’ll do the rest of the prep work while it comes to a boil.

Thaw the shrimp by running them under cold water in a colander until they have softened. Drain thoroughly and set aside. (If you have larger shrimp, peel if necessary and cut into small, bite-size pieces.)

Whisk together the olive oil and lemon juice in a small bowl and toss with the onion, and set aside.

Once the water is boiling, drop in the orzo and cook, uncovered, until the pasta is tender (probably about ten minutes, but see package directions and test as you go). You want to go a little beyond al dente, since this isn’t a hot dish, but you also don’t want it mushy.

When the pasta is cooked, drain it in a colander and rinse with cool water to remove excess starch. Drain thoroughly, and combine with the shrimp, onion mixture, tomatoes, and basil. Season to taste and serve room temperature or chilled.

Slivering basil: you want to use a knife cut called a chiffonade. Basically, you stack the leaves together, roll them into a tight little cigar shape, then cut them across into little shreds. See the image in the post above for a visual representation.

The recipe that inspired this one uses canned tuna, and that would also be very good here. In fact, I imagine any canned seafood would make a lovely variation. Or in the other direction, if you’re in a coastal area where you can get easily fresh shrimp you should definitely avail yourself of them. You’ll likely need to boil and peel them yourself unless you have a very full-service fishmonger, but the seller should be able to give you some tips if you aren’t already wise to the ways of shrimp.

I used 10 oz. of shrimp just because that was the package size that was readily available at the grocery store. Depending on your love of shrimp and the health of your wallet, you could easily increase the amount of shrimp in here, up to doubling it.

Vegetarian option: you could certainly just leave out the shrimp, and this would be a nice grainy side dish, but I think it needs a bit more bulk to really sustain you through a hot sunny afternoon. I suggest cheese, and while the specter of Caprese salads might lead you to think of mozzarella, I think feta would be a better choice. I’d suggest not mixing it in and letting it sit for leftovers, though, since it can get a little mushy; instead, make the salad as is, omitting the shrimp, and add the feta when you serve it (or in the morning when you put together a brownbag lunch). Be careful when seasoning the salad not to oversalt, since the feta will bring a lot of saltiness with it.

People often think orzo is a grain, since it looks so much like rice. It’s actually a pasta, but this reipe would also adapt well as a grain salad. I’m thinking brown rice, but you could probably go with quinoa or even wheat berries very productively. Just make sure the grains are cooked all the way to tenderness — even more than pasta, cold grains tend to seize up and feel chalky between your teeth when they’re not very tender.

4 responses to “Orzo salad with shrimp and basil”