When I show up at a potluck, you can almost guarantee that I’m bringing something vegetarian, if not vegan. This is a little strange, since I have a deep and abiding love of charcuterie, as the deli drawer in my fridge can attest. But I know a lot of people who fall into a category that never fails to amaze me: vegetarians who don’t cook. And so when somebody shows up at a potluck with something veg*n (that isn’t hummus), oh! the sounds of joy. It’s not enough that my contribution be vegetarian, though. When it comes to food, I’m motivated equally by my own gluttony and by a desire for other’s praise. I’m a showboater, I’ll freely confess it. So if I can show up with something that makes the vegetarians happy, but that’s also so good the omnivores devour it without a second thought? Jackpot. 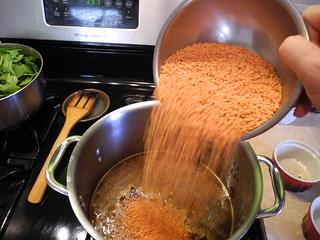 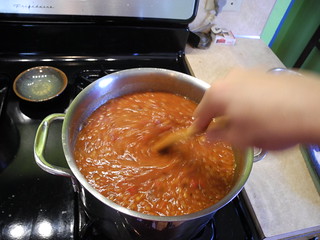 Tomorrow my department is holding a soup fundraiser to raise money for the Mid-Ohio Foodbank, so it’s vegan soup time. Other colleagues had already claimed the obvious slots (black bean soup, mixed veggie soup), so I turned to my secret weapon: the Post Punk Kitchen. (It’s hardly a secret weapon, since it’s a public website.) The PPK’s creator, Isa Chandra Moskowitz, was my muse when I was dating a vegetarian. Vegan with a Vengeance taught me how to cook inventive, delicious meals that happens to contain no animal products. Her recipes never settle for “pretty good for vegan food.” It’s just plain great cooking. So when I saw a recipe for a lentil soup with kalamata olives (be still my heart), I knew what I’d be bringing for the vegans. (Though no one who knows me will be surprised that I went and changed things…) 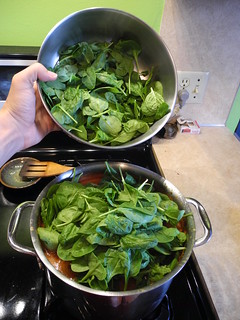 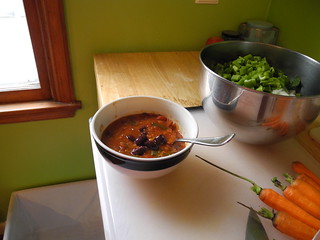 The biggest switch-up here is in the lentils. Isa opts for the standard brown lentils, but I wanted them to melt in the broth, more like the texture of a dhal. I also went ahead and browned the onion — a big red onion, because my strange local grocery store doesn’t seem to carry a nice pungent yellow onion, just the sweet ones — rather heavily to match the rich flavors from the smoked paprika and the fire-roasted tomatoes. And I’m serious about this: I actually walked out of the kitchen multiple times to switch out laundry, deal with a blanket-tangled cat, etc. The onions will be fine. (Though I cooked them so hot, in fact, that when I finally added the broth my smoke detector flipped out at the steam, which was really missing the point on its part, I think.)

Yield: 5 qts. I know, yikes! I made a big batch for the fundraiser, but this could easily be halved.

In a large soup pot over medium-high heat, saute the onions in the olive oil, stirring occasionally, until they are well-browned but not burnt, around 10 minutes. Add the garlic and saute for 30 seconds or so, then add the thyme and paprika, the broth, and the lentils.

Add in olives and spinach (it will cook down quickly, but add in handsful if it won’t all immediately fit), and stir until the spinach is wilted and soft. Let stand for 10 minutes so the flavors can blend, adjust for salt, and serve.

Broth: If your broth is rather salty, or if you’d like to use bouillon, use half broth/bouillon and half water. The olives are rather salty already, so better to play it safe.

Olives and onions: swap them as you see fit.

Spinach: you could probably use frozen chopped spinach, though I haven’t tried it. I’d guess one 10 oz package would be fine.