Okay: let’s say you’ve made some Basic Seitan (or you decided that it sounded interesting, but weren’t totally convinced, and so you bought some — no judgment here!). But now you don’t know what to do with it. And meanwhile it’s cold and getting colder, snowier, more wintry. You need comfort food. You need warm, hearty dishes that stick to your ribs, but — and here’s the kicker — you don’t want to spend forever at it, because there are snow angels to make and books to read, and also you’re hungry, like, now. 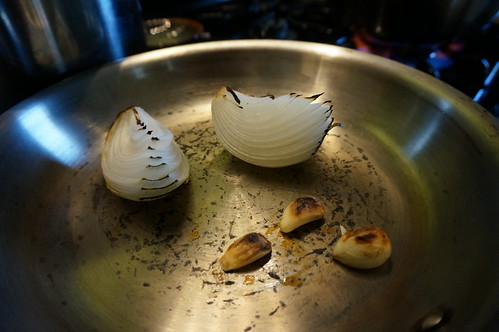 Here’s the great thing about seitan: you can pull that off. Whereas a roast, a stew, a meaty braise could easily take hours and hours, many similar seitan dishes can come out in around a half hour. And this is one! 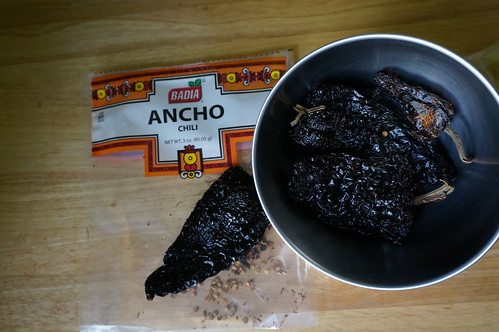 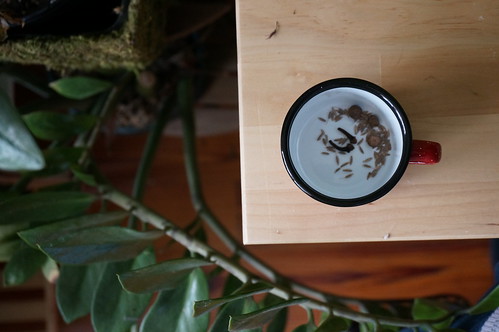 Let me just put the high points here: This is a very flavorful dish: a rich, thick sauce of pureed ancho chiles, full of deep flavor but almost no spicy heat, with chunks of potato and seitan. And don’t let the multiple cooking methods throw you off: they’re all very easy, and the whole thing comes together quickly. What’s more, it doesn’t require much in the way of exotic ingredients: other than perhaps the ancho chiles (depending on your cooking habits), everything here is a fairly common pantry ingredient. 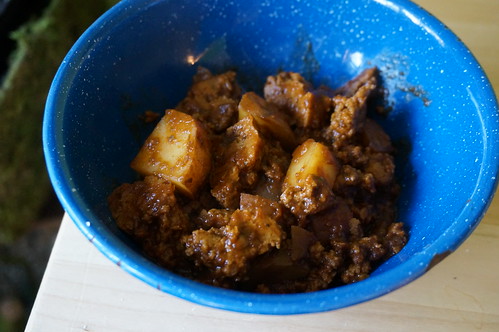 So let’s review: Fast. Delicious. Mild enough for broad appeal, but flavorful enough to excite. Makes you look like a kitchen wizard who makes comfort food appear from nowhere. What’s not to love? If you want to really do it up right, combine it with some spicy cactus salad and arroz Luz Catalina. Take that, blizzard. 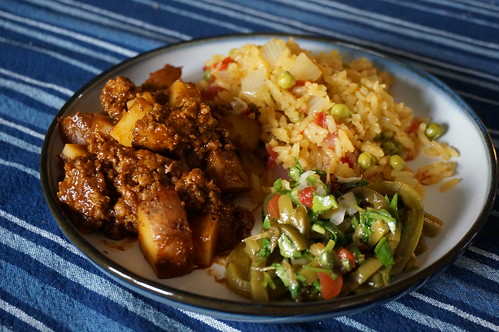 In a medium bowl, cover anchos with boiling water. Let soak for 15 minutes then strain, reserving soaking liquid. Discard the stems and cores from the chiles.

Meanwhile, broil the onion (in one chunk) and the garlic on a baking sheet or in an oven-proof skillet for a few minutes until they are browned. (The garlic will likely be done before the onion; remove it so it doesn’t burn!).

In a small, dry skillet, toast the seeds over medium heat until they become fragrant, about a minute.

Combine anchos, onion, garlic, whole spices, and cinnamon in a blender. Add some of the reserved ancho-soaking liquid and puree; add enough liquid to make a sauce.

In a large saucepan, heat the olive oil over medium-high until it shimmers. Pour in the sauce and fry for five minutes, then add the potatoes and seitan. Continue cooking until heated through, then serve.

The whole spices have vibrant flavor, but you can certainly use ground spices if that’s what you have. Use about a 1/2 tsp each of allspice and cumin, and an 1/8 of clove. Skip the toasting step and add to the blender along with the other ingredients.

Don’t have cooked potatoes lying around? Don’t sweat it; you have plenty of time while the anchos are soaking and the onion and garlic are broiling.

This recipe was originally written for beef, and you could certainly recreate it with that or another meat. Fry the meat, in chunks, in the olive oil until brown, then add the sauce. Simmer till meat is tender, adding some water if it gets too thick, then add the cooked potatoes and heat through.