Sometimes writing the headnotes to these recipes is fairly straightforward: I say why I like the food, describe why someone else might also like the food, add in an interesting detail or two, and presto! A post. And then there’s posts like these. Let me explain. I’ll say a word and you tell me how you react: “seedcake.” 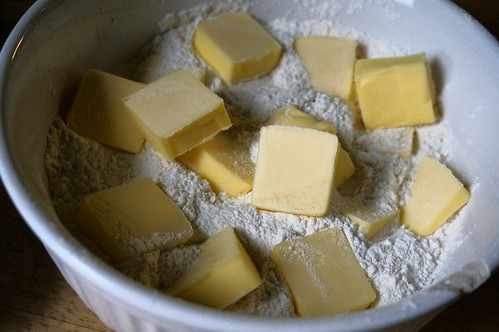 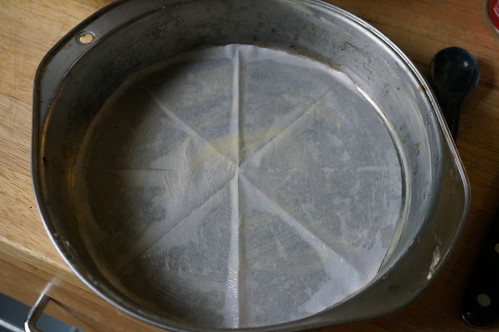 As far as I can tell, there are three usual reactions: complete unfamiliarity, excited memories of foreign yet comforting books, and ‘what about it?’ Complete unfamiliarity is a fairly common American reaction. The exception is Americans who grew up reading fantasy, especially of the British sort. Hobbits in Middle Earth, Mr. Tumnus and the Pevensie children in Narnia, all manner of other vaguely Victorian and post-Victorian mythical creatures and their human guests: absolutely mad for seedcake. For American kids like me, always with our nose in a book, the idea of seedcake was fascinating. It sounded preposterous — a cake! made of seeds! — and yet at the same time it was obviously something to be desired, based on the excitement of its eaters. But since it was entirely absent from the world around me, I just assumed it was utterly fictional, as much as butterbeer or Qartheen shrimp and persimmon soup (or at least that soup used to be totally fictional, and it’s hard to throw a virtual brick without hitting a butterbeer recipe on the internet, but those are fan interpretations). 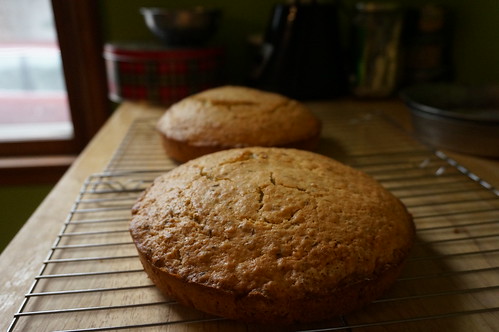 In any case… nope.

Because then there’s the third reaction, which mostly comes from Brits and those who are better acquainted with British culture than I am. It turns out that seedcakes are endemic to British young-adult fantasy novels of the early twentieth century because, well, they’re endemic to early twentieth-century Britain. Shocking, I know! And they haven’t gone away. The Aesthete, over at her series of not one but five (!) seed cakes from the mid-19th century through the 1990s, begins by quoting Joan Hickson as the ever-so-British Miss Marple questioning a waiter in the BBC adaptation of Agatha Christie’s At Bertram’s Hotel: “But is it a real seed cake?” And while, yes, the cake is presented as old-timey in the Beeb’s adaptation, nevertheless: it’s a 1987 production, and of course everyone watching it knows what a seed cake is. 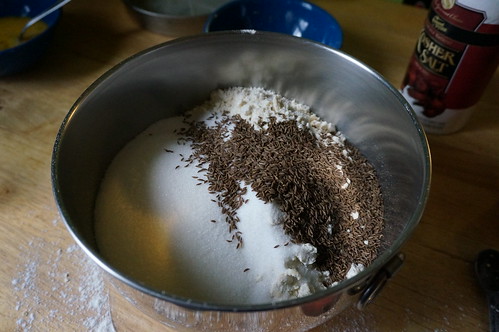 Everyone in the BBC’s broadcasting area, that is. I nearly didn’t post this recipe, despite its utter deliciousness, because really: isn’t the world already glutted with seedcake recipes? But it occurred to me that I hadn’t seen one single recipe that used American volumetric measurements. So there it is, folks, my claim to fame: I wrote this in cups. Perhaps that small shift is all this cake needs to become as well known in the land of apple pie and Funfetti cake mix as in its homeland. 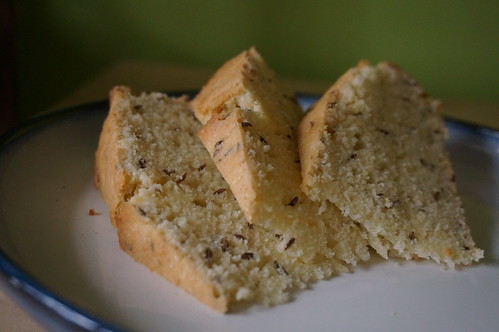 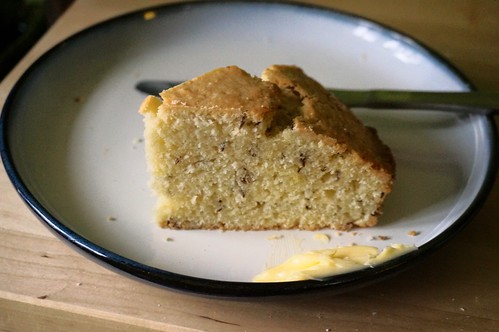 All right, I’m skeptical about that, too. But this cake certainly deserves it, with its bright, zingy anise flavor from the caraway (that’s somehow totally different than the flavor in a deli rye), a generous helping of rich butter, and just the right amount of sugar to balance out your morning coffee… or your morning cuppa. 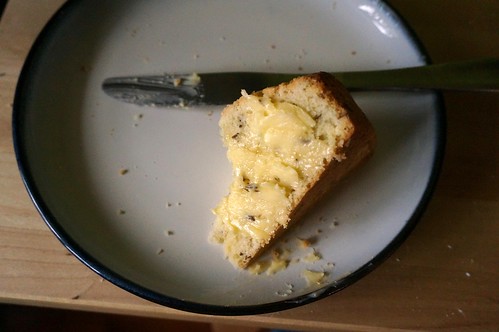 Adapted from “Simple Seed Cake” in M.S. Saille’s  A Kitchen Cauldron, as reprinted by The Goddess & The Green Man

Combine flour, baking powder, and salt in a large bowl. Cut in the butter with a pastry blender or two knives (or rub it in with your fingers) until the butter is in small bits, no larger than a pea. Add the caraway seeds, sugar, eggs, and water, and stir to combine.

Divide batter between tins and bake 45 minutes, until browned on top and a toothpick inserted into the middle of the cake comes out clean.

Cool in pans 10 minutes, then remove from pans and cool completely on wire racks (remove the parchment to prevent soft bottoms). Serve as-is, or with a bit of butter.

You might try some other whole spices in here instead of the caraway, as long as they’re not so big or hard that they would make the texture unpleasant. Aniseed and poppy seed are both traditional variations, usually in combination with the caraway. Obviously the more traditional warm spices would also make sense in a cake — coriander or cardamom, for example, if lightly crushed (and go easy on the cardamom!), but also I could see dill seed, celery seed, ajwain, even maybe cumin. It sounds way off-base, but caraway sounded like utter nonsense before I first made worked with this recipe, and it’s delicious. The sweet baking process does transformative work. (Just know that I haven’t actually tried any of these, so maybe make a half-batch if you’re trying something from way out in left field.)

Many other recipes call for citrus of some sort: citrus zest, chopped candied peel, even orange flower water. None of these really change the dry/liquid proportions (orange flower water is used in fairly small amounts), so you can have a fairly free hand.