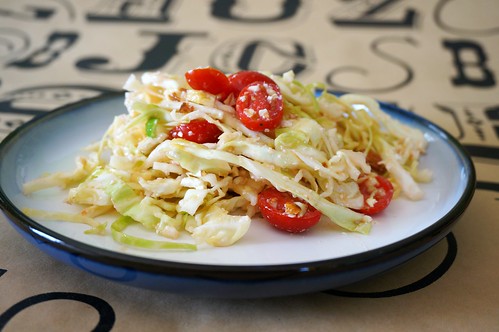 Late last week my friend Matthew sent me a message: “Re: your food blog — If you take requests or suggestions, I’d love to see a salad or two from you. 🙂 Just sayin’.” An assignment. An assignment! You see, long before I identified as a food-obsessed home cook, I identified as a book-obsessed perpetual student, and I still do. My most consistent writing was always in response to deadlines, and as a master’s student in creative writing I thrived on weird writing assignments, the more restrictive the better. So when you take that natural inclination to meet assignments and deadlines, and then you combine it with the joy I get from making food for other people? Oh, I was set. 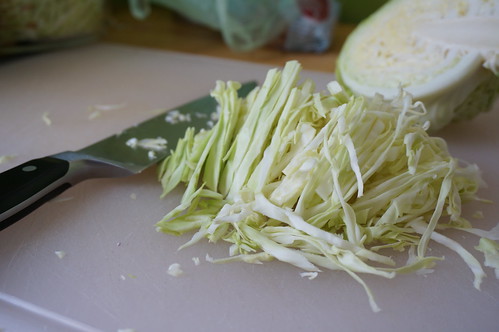 Well, mostly set. If Matthew had made this request in, say, late August, when summer’s at its height and the fall produce is starting to roll in, I could have whipped out a good dozen hearty, healthy, satisfying salads without giving it more than a few second’s thought. Now though, in late winter, there’s literally nothing green coming out of the ground around these parts. Sure, there’s always the old standby winter salad — roasted-beets-and-citrus-slices-with-goat-cheese — but as great as it is I feel like there’s nothing new I can do there. [Confidential to Matthew: if that salad’s not already in your repertoire, there are approximately seven billion variations out there.] 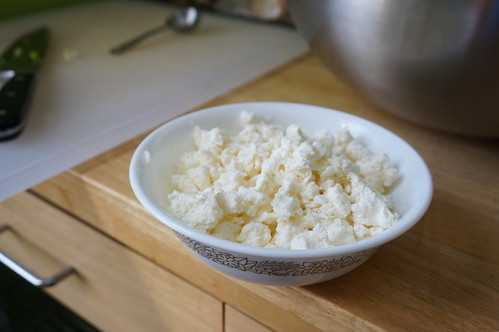 So what do we have that isn’t a beet? Cabbage! Cabbage and all its cruciferous cousins dominate the produce aisles this time of year, and I have weakness for all things Brassica. While I do love a basic cole slaw, though, that wasn’t right for this assignment: not filling enough, not enough protein. But as I wandered the grocery store of my mind, it started to come together. 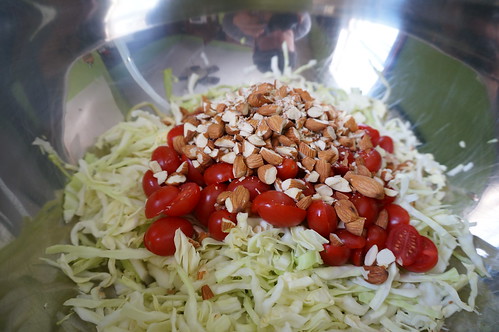 Protein would come from feta (always a good salad choice, with its tanginess and its substantial crumble) and from almonds, one of my favorite salad nuts. Extra visual interest from some cherry tomatoes, which are the only tomatoes worth eating out of season. And instead of a heavy mayonnaise dressing, a nice hot oil dressing flavored with scallions: a little bit of lightness in honor of the warmer temperatures hopefully coming our way. 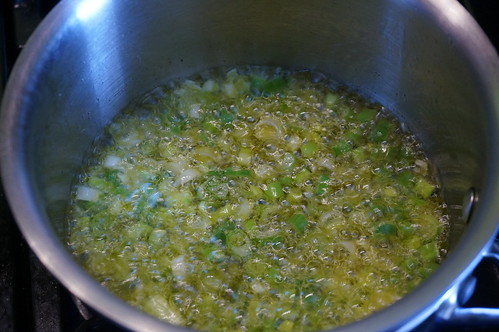 Of course, this was all in my head: it could have come apart completely in the making. In my kitchen, though, pouring the sizzling hot oil over the bowl of shredded cabbage, I knew this was a winner. The cabbage softens just enough, keeping a bit of crunch. The tomatoes wilt just a bit and add some of their juices to the dressing. The almonds give a satisfying crunch, as well as energy to stave off the 2pm Doldrums, and the feta backs them up with a creamy heft that has me going back to the fridge with a fork at all hours of the night. 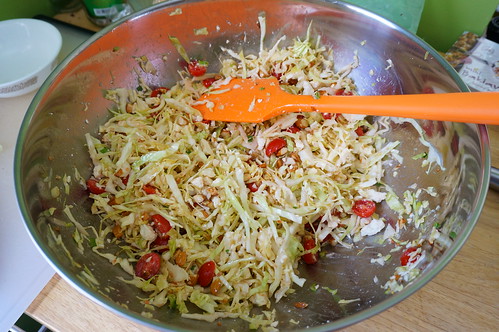 This salad is a star in its own right, but it also plays well with others: it’s happily shared space with the other four recipes I made that day for Matthew. Yes, four; I’ve always been an overachiever. Don’t worry, they’ll show up eventually. Until then, try this in your own kitchen, and I’m pretty sure you’ll get an A. 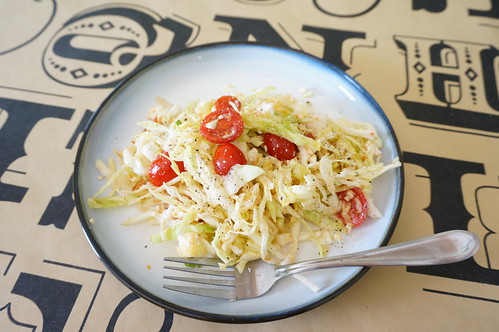 Pile the tomatoes, and almonds on top of the cabbage in a large heatproof bowl.

Heat olive oil in a small saucepan until very hot (a chunk of scallion dropped in will sizzle loudly). Add all scallions to oil and cook thirty seconds, then immediately pour over tomatoes and almonds.

Add lemon juice, feta, and pepper, and stir to combine.

You could swap in pretty much any nut you like here, or even a mix.

And yes, of course you could sub in goat cheese, you traditionalist you.