When I’m writing, I like to imagine my readers’ reactions — I think that’s fairly common for writers. And as I’m sitting here in front of my computer, typing “Coconut creamed spinach” into the title bar, my internal reader is having a field day: oh, so you disappeared for three weeks, and then when you come back you’re giving us, of all things, creamed spinach? On New Year’s Eve?! 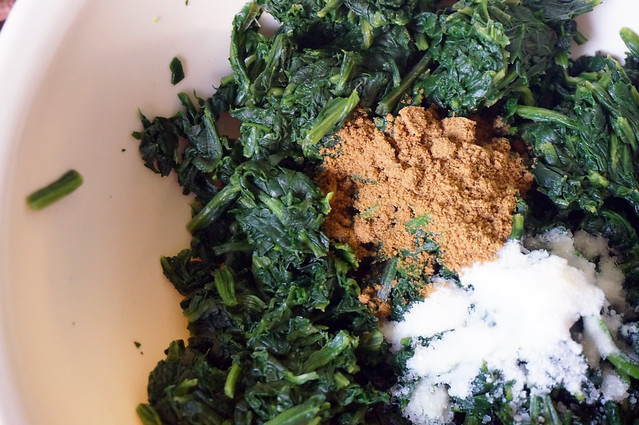 Yes: yes I am. Unbelievably, this simple looking bowl of drab greens is one of my favorite discoveries of the past year. To illustrate, the day after I first made this, I was scrounging for breakfast items, and I settled on a bowl of this spinach, with a little bit of toast. Scout’s honor: when I put the first spoonful in my mouth, I said to the cats “ohmygoodnessIforgothowgoodthisis,” all in a breathless jumble. 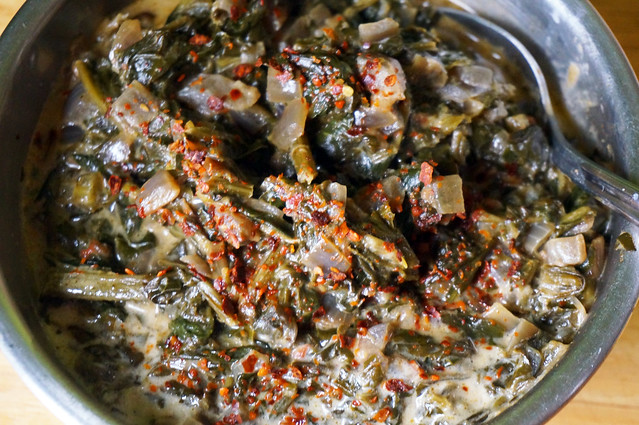 So what makes it so good? I mean, it’s… wilted spinach?

Only in the sense that the Great Pyramid is a pile of rocks. Here, plain-Jane spinach gets a radical transformation: first, a big pile of red onions lays down a rich base. Second, tomatoes and chile come in to brighten the flavor. Spinach and salt and — most importantly — a generous portion of cumin come in for a good long simmer, ending with a hefty swirl of coconut milk to tie it all together. 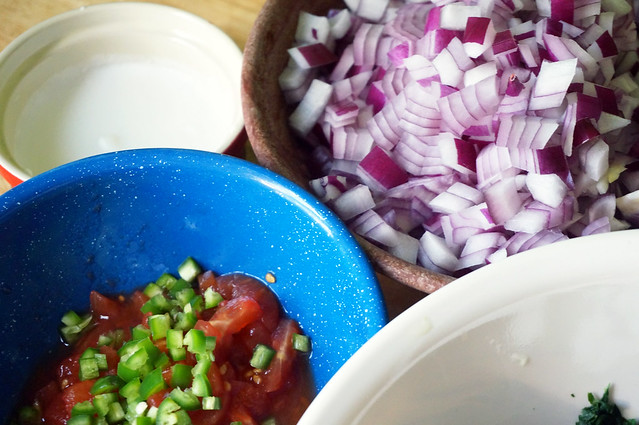 But jump back one step: that long simmer is the key here. When cooking meat dishes, we’re used to the idea of a long simmer. With vegetable dishes, however, we Americans have mostly gotten away from the idea of the long simmer (except sometimes in Southern cooking: props, y’all). And while I do love a bright, fresh quick-sauté of vegetables, we lose a valuable method when we don’t long-cook vegetables. During the half-hour this spinach simmers, magic happens: the tomatoes and chile cook away into nothingness, and the onions come very close to the same fate. The cumin moves away from its usual sharp pungency, taking on deep, smooth characteristics, like a well-reduced wine sauce or the crisp surface of a roasted potato. The spinach itself pulls in all the flavors the melted vegetables have given up and melds them with an earthiness we’re used to in far heartier greens. And even the coconut milk, in the last ten minutes, displays a depth of flavor that is lightyears away from piña coladas and cream pies. Time = alchemy.

I’m making another batch this afternoon to take to a small NYE gathering (because my people aren’t all about that dance club life). I’m hoping those long-simmered leaves carry with them prosperity and joy for the New Year. It’s probably a little late for this to be your New Year’s Day greens, but maybe I’ll strike gold with pantry-and-freezer staples. Even if not for the day itself, may this homely dish bring you comfort in the coming winter: happy new year. 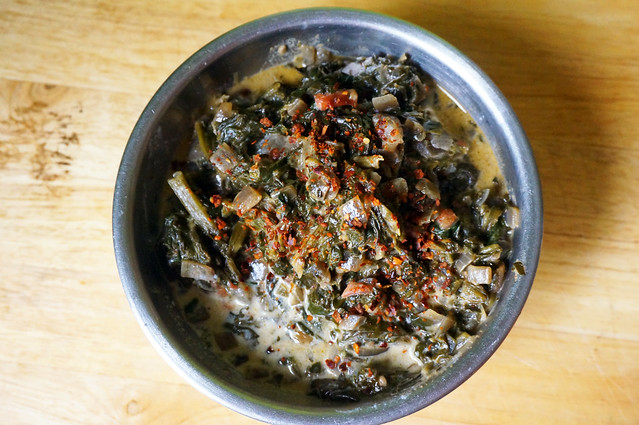 Time is the crucial element here, transforming a pile of disconnected vegetables into a rich stew with flavor far beyond its components. Don’t be put off by the large amount of onions, or the full serrano chile: after the half-hour simmer, they meld smoothly into the background, and the coconut ties everything together. It’s the absolute best spinach I’ve had to date.

Heat vegetable oil in a large, high-sided skillet (or saucepan) over medium-high heat and sauté the onions until they turn translucent, about 5 minutes. Add the tomatoes and serrano and cook, stirring occasionally, until the chile begins to soften (another 2-3 minutes).

Add the spinach, water, cumin, and salt. Bring just to a boil, then cover and simmer over low heat for 20-25 minutes. The tomatoes should be near to falling apart, and the spinach almost meltingly tender.

Add the coconut milk and cook, covered, for ten minutes further, until slightly thickened. Taste and adjust seasoning if necessary.

Serve with bread or rice, sprinkled with a bit of coarse red pepper if you like.

The proportions here are more of an idea. Have no further use for a half-can of tomatoes? Add the whole thing. Hate spiciness? Reduce or omit the serrano (though I promise you: this is very mild as written). Love coconut so much? Add more (though you may want to cook it uncovered for a bit to help the dish thicken).