Growing up, we had a big book of seasonal activities for kids, the sort that might have patterns for cutting out construction paper turkeys at Thanksgiving, or making heart-shaped paper chains for Valentine’s, etc. Despite the fact that I don’t recall ever flipping open this book and thinking “oh, what a fun activity to occupy my time,” I remember going back to it over and over in response to childhood boredoms on those pre-Puffin Rock-on-Netflix 1980s weekend middays. And to the best of my recollection, nestled among the black cats and witches’ hats cutouts for Halloween, there was some sort of witch’s brew punch recipe that involved cranberry and orange juices. 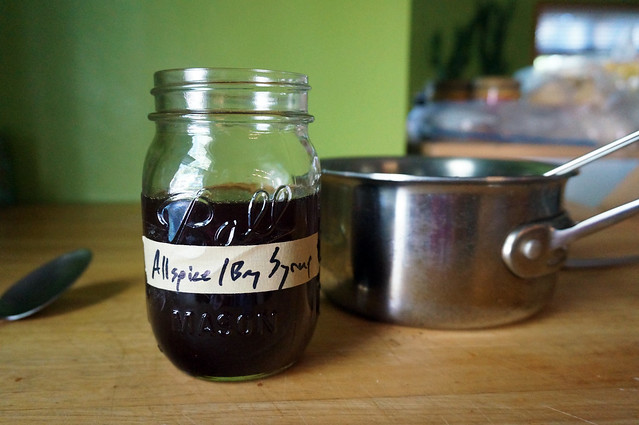 Not that I can verify this, of course — the paragraph above gives pretty much every detail I remember, other than the additional detail that I’m about 60% sure the book was brown, so this is effectively ungoogleable.

In any case, I suspect we only made that punch once, but somehow it stuck so firmly in my head that when anyone mentions a ‘Halloween drink’ I immediately assume a cranberry + orange mixture. That memory remained only memory, though, until a few weeks ago, right as we were turning the corner into real-and-truly fall, when the idea bubbled back up to the top and the only thing in the world I wanted was mixed cranberry and orange juices. 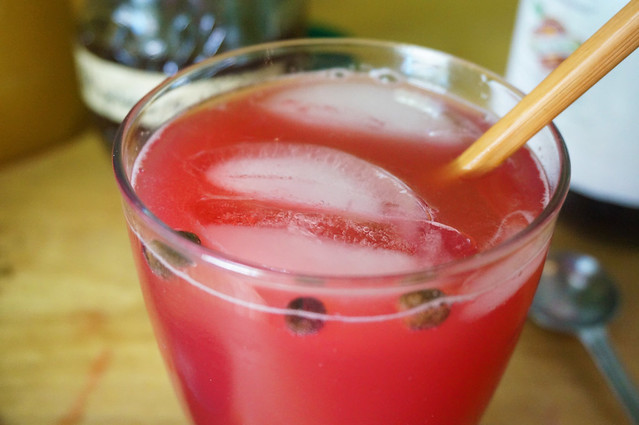 Here’s the thing though: by itself, this is not a tasty mix. The cranberry is so astringent that you either have a mouth-puckering cranberry drink, or you dilute it with so much orange that you’re just drinking, well, pink orange juice. I suspect the drink of my childhood would have been with a cranberry juice cocktail, but my schmancy inclinations meant the bottle in my fridge was 100% searingly astringent squeezed cranberries. 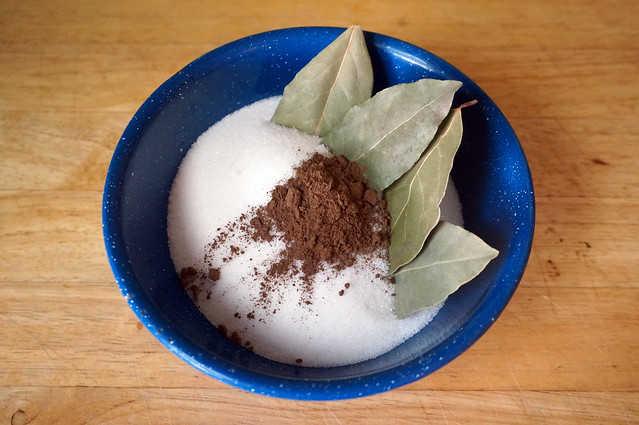 So, back to the drawing board. Obviously there was going to need to be some sugar involved, but surely we could be more autumnal than a simple syrup. I thought about molasses, I thought about brown sugar, then instead I veered spiceward and chucked in some ground allspice and bay leaves, dramatically upping the harvest deliciousness quotient. All that remained, then, was a little soda water to lighten the whole thing, and tada: a delicious, refreshing beverage that would be entirely at ease at your upcoming Halloween party.

And let me be entirely clear here: this is delicious as-is. I have drunk many glasses of it quite happily. Still though, any food blogger will tell you that the first question many readers have about a nonalcoholic drink is but can I put booze in it??? And the answer is yes: yes, you can. And the liquor you’re going to want is rye whiskey, sharp and a little biting and filled with flavor. (Personally I’d go with Old Overholt, both because it’s cheap and because it’s delicious, but that’s your call.)

And finally we need a name. My brain kept wanting to go with “witch’s brew,” but (1) so generic; (2) on Pinterest that seems to denote some sort of orange concoction that may or may not have sherbet. So in recognition of the dark, murky depths of your pot of spiced simple syrup, and of the soda water effervescing this brew into a bubbly delight, let’s go with The Fizzing Cauldron. Whether your cauldron fizzes with virgin bubbles or with a hint of darker magic, enjoy it for Halloween and beyond. 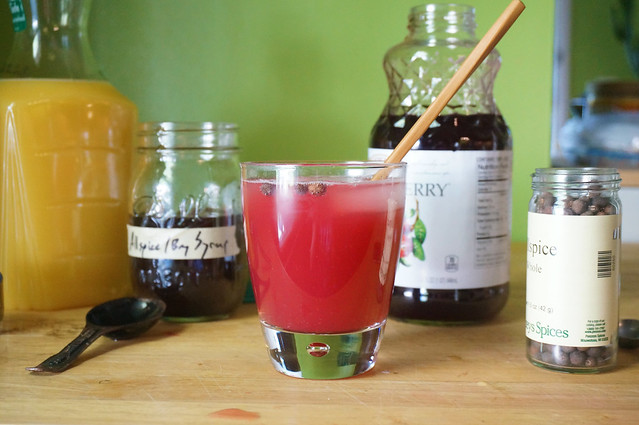 In my mind this drink is associated pretty strongly with Halloween, but its autumnal flavors would be welcome throughout the season. If you’re looking for a sprightly fruit drink with a depth of flavor and a hint of astringency — one you won’t get tired of drinking — this is for you.

For the syrup: Combine the sugar and water in a small saucepan over high heat. Bring to a boil, stirring to completely dissolve the sugar. Remove from heat, stir in the allspice and bay, and let cool to room temperature (about 20 minutes). Remove the bay leaves and discard; you can strain the allspice out using cheesecloth, but I don’t think it’s worth it, since it settles to the bottom. Keep refrigerated, for up to 2 weeks.

For each drink: Combine the juices, syrup, and whiskey (if using) in a glass with a handful of ice. Top with soda and stir to combine.

I’ve made this in both a rocks glass and a taller water glass. Both work just fine; the only difference is the degree of dilution by the soda. If you like a drier drink, aim for the tall glass.

The color’s a bit darker than shown in the pictures (taken on a bright, sunny day); if you’d like it yet darker, add a splash of grape juice or red wine, just for color.

Batch option! For 6 drinks make a base with:
1 1/2 cup cranberry juice
1 cup orange juice
1/2 cup syrup.
For each drink, portion out a 1/2 cup of the base and mix with soda and (if desired) whiskey.

For 12 drinks you can easily double the above to 3 c cranberry / 2 c orange / 1 c syrup, but past that you’ll probably need to make a larger batch of syrup. You could keep expanding the proportions to get a whole punchbowl’s worth, but there’ll be a bit of trial and error involved to get the right amount of soda water; I suspect you’ll want about equal proportions of base and soda, but take that with a grain of salt since I haven’t tested it!

3 responses to “The Fizzing Cauldron: a drink for Halloween (or whenever)”