One of the weird things that happens when you start a food blog is that you get requests from your friends. It’s not that nobody ever asked me for recipes/tips/ideas/whatever before, but when suddenly there was a more formal publication venue, there was an added element of “you could put it on your blog!” Not everything makes it here, of course, but when my friend Anne asked if I had a recipe for sweet potato enchiladas, I knew from the start that we’d be here eventually. 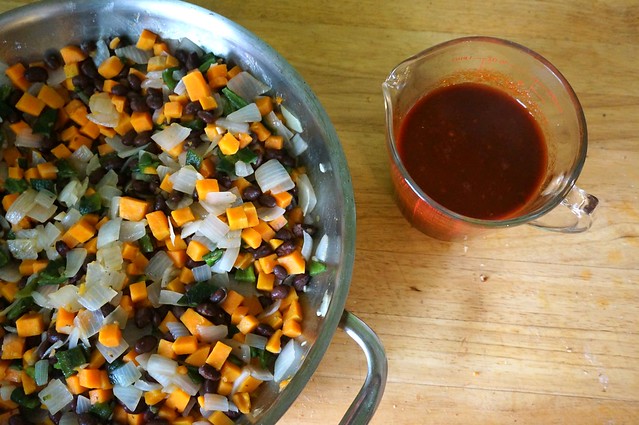 Not that I had a recipe for sweet potato enchiladas in my back pocket. “But how hard could they be?!”, I thought. Oh, buddy. Let’s just say it’s a good thing I like sweet potatoes, because I can now tell you many ways to go awry. You could make the sweet potato chunks too big so they’re unrollable. You could prepare, like, three times as much filling as you can use in a large baking dish’s worth of enchiladas. You could realize that your sauce is really old school and that it’ll probably confuse people who didn’t grow up eating Tex-Mex recipes from the 1940s. You could drown them in cheese. You could overcorrect and use way too little cheese (though this does make your cheese-hating husband happy). You could mistreat your tortillas in a way that ends up with you dodging a big splash of very hot oil. You could find yourself at the dinner table with friends you’ve invited over, muttering about how the onions are slightly too pungent and the sauce isn’t quite ‘popping’, all while they’re gobbling it up and looking at you like you’ve lost your mind.

And really you have. 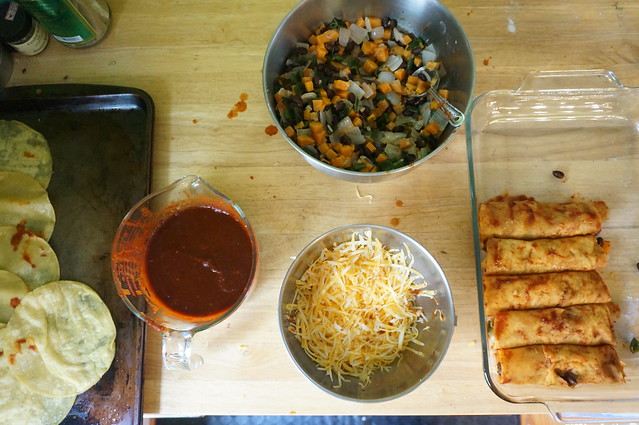 But in the end you arrive at a pan of enchiladas that sings. The sauce has just the right combination of earthiness and fruitiness, the sweet potatoes are perfectly sized to meld with the black beans, the fresh green taste of the poblanos is harmonizing with the red brick tastes of the dried chiles, the cheese is smooth and velvety but doesn’t overwhelm the delicate flavor of fall’s favorite tuber. 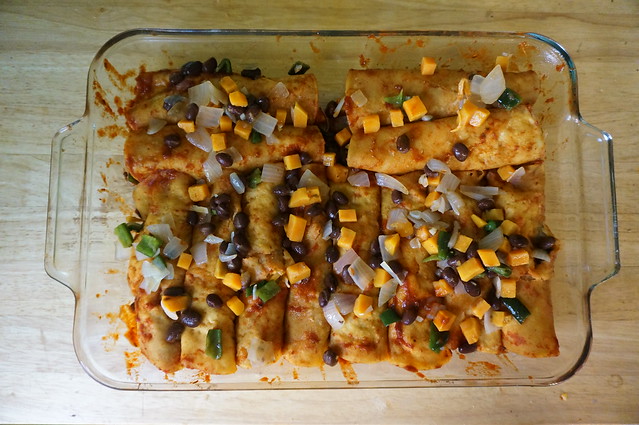 And then you realize you’ve made something like 5 dozen enchiladas in a week and you vow never to make the damned things again… until next weekend. 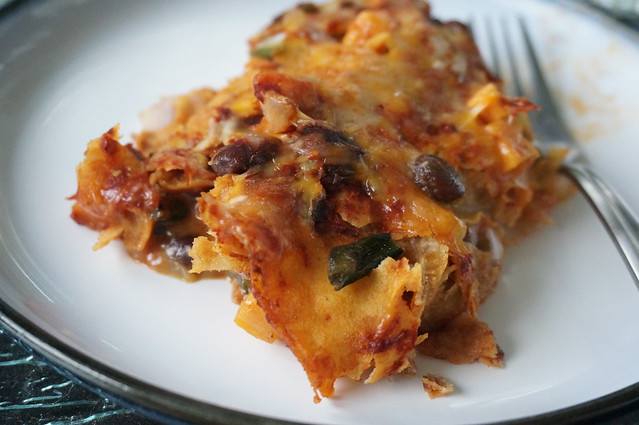 I first made these at a friend’s request, but I’m pretty sure they’re in the permanent rotation now. What’s not to love? Little cubes of sweet potato jostle with black beans and diced poblano pepper in rolled corn tortillas with a gentle drape of cheeses and a velvety brick-red sauce — perfect for a crisp fall day.

The recipe looks long, I know, but it’s actually a pretty simple concept: simmer and puree the sauce, saute some vegetables, roll the enchiladas — the rest is just details. And if you put in a little prep time over the weekend, just 45 minutes or so, you can have these on the table in less than an hour for a hearty weekday dinner.

Remove the stem and seeds from the dry chiles, and simmer in the stock for 15 minutes until softened.

Combine the softened chiles and their broth in a blender along with the tomatoes, oregano, cumin, salt and sugar. Blend until smooth; set aside.

Line a baking sheet with foil. Split the poblanos lengthwise and remove the stems, seeds, and ribs. (Poblanos often have an oblong cross-section; cut them so that you have two mostly flat halves rather than two U-shaped troughs.) Lay the poblanos on the foil-lined baking sheet and broil near to the flame for 10 minutes, or until rather blackened. Remove the poblanos to a heat-proof bowl and cover with the foil from the baking sheet or with plastic wrap. Let rest at least 10 minutes.

Take the steamed poblano peppers and peel off the blackened skin. (It’s often easier to do this under running water, and you may want to wear gloves, depending on your sensitivity to pepper burns.) Dice the skinned poblanos and mix into the other vegetables, along with the black beans and 1 tsp salt.

Heat the 1/2 cup oil in a small skillet over medium heat. Briefly fry each corn tortilla in the hot oil, about 5 seconds on each side, then remove to a baking sheet lined with paper towels. (A little more info: you want the skillet to be not much larger than the tortillas, so as to conserve oil; if the oil’s too shallow the tortillas stick, so you may need to add a bit more as you go. Many people would recommend tongs, but I actually find a soup spoon to be far more maneuverable, so long as I tilt it a bit while letting the excess oil drain off so that it doesn’t collect in the bowl.)

Preheat the oven to 350°F and arrange a rack in the middle of the oven.

Lay out your work station with tortillas, sauce, cheese, filling, and a 9×13 baking dish.

Take a tortilla and dip it in the sauce. Holding the sauced tortilla in the palm of your hand, lay a big pinch of cheese in a stripe down the middle of the tortilla (don’t go overboard, or it’ll be hard to roll and you won’t even taste the filling in the end). Top with 2 heaping tablespoons of the filling. Roll into a tube and place seam-side down in the baking dish.

Repeat for the remaining tortillas. I generally find that I can fit 8 enchiladas going down one long edge, and then 2 pairs will fit in the gap to the side.

(You will likely have both sauce and filling left over. They make a fine quesadilla, or just a snack out of the fridge.)

There is absolutely no reason you have to make this all in one go. The sauce will keep for a good week in the fridge — just heat it briefly if it seems too thick to dip/drizzle (it doesn’t need to be hot, just loosened). The filling will keep similarly long, and can be used straight from the fridge. If both of those portions are prepped in advance, even a clumsy tortilla roller should be able to have these out of the oven within an hour, and within 40 minutes if you’re deft.

Old-school Tex-Mex style: I started with a rather older recipe my family uses for beef enchiladas, which is far earthier and feels a little ‘vintage’. It’s definitely more of the classic Tex-Mex style. If you want to try doing it old-school, make these changes:

– Use 3 ancho chiles and omit the guajillos and tomatoes. Simmer the anchos in 4 cups stock, puree the mixture along with the spices, and return to the pan. Mix 1/4 cup flour and 1/2 cup water into a slurry, and whisk the slurry into the chili puree. Heat the mixture over medium heat, whisking frequently, until it thickens into a good old-fashioned chile gravy.

– Do not add the onion to the skillet with the sweet potatoes and garlic. Instead, dice finely and, when you roll the tortillas, add a scattering of raw onion. Also scatter some of the raw onion over the top of the enchiladas before baking.

– Bonus old-school Tex-Mex points: use Velveeta or another American cheese.

Casserole style: use either the recipe as written or the old-school version above. Instead of rolling, though, lay four sauced tortillas in the bottom of the pan (they’ll overlap). Spread a good layer of filling and of cheese, then another layer of tortillas, another filling/cheese layer, and a final layer of tortillas. As in the rolled recipe, drizzle with more sauce, scatter with filing and cheese, and then bake as directed.