So, about six weeks ago Kelly Conaboy posted an article on The Awl with the troll-baity title “The Vast Bay Leaf Conspiracy.” In it, Conaboy insists that the bay leaf is a lie, that it has no flavor, that it’s all a sham. She interviews rather a lot of chefs trying to get confirmation, and they all, predictably, shoot her down. I’m about 98% certain the whole thing’s intended as a joke; it’s all very tongue-in-cheek. (The commenters, though, have zero chill about it and hold forth at length about the wonders of bay leaves; reading their earnest screeds is its own kind of wicked fun.) 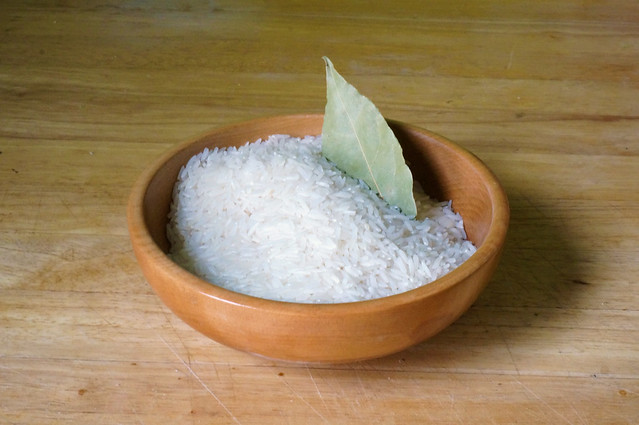 The truth is, though, that if you’re not accustomed to tasting for it — and/or if you’re using some dried-up leaves that date back to the Reagan administration — it really can be hard to realize the worth of a bay leaf, which is of course the origin of Conaboy’s article. And that’s a shame, because bay leaves are super-great! (I’m part of the conspiracy, I guess.) If you take a deep whiff of a bag of good, fresh bay leaves, you’ll first get a slightly spicy, pungent earthiness that tingles at the back of your throat. But then, in addition, there’s a sharp, almost citrusy note that floats on top of the thing, like the top note of a complex perfume.

And it’s that combination of low and high that makes bay leaves such a valuable tool in the kitchen. They take simple stocks and broths, humble bean soups and stews, and they round out their flavors so they taste fuller in the mouth. They’re magical. But because they’re so often combined with many other aromatic flavors, it can be hard to pinpoint exactly what they bring to a dish. 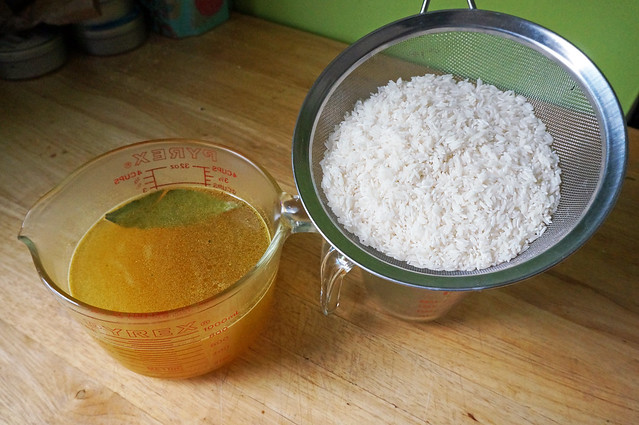 That’s why I first cooked this bay leaf rice: to demonstrate, if only to myself, exactly what the bay leaf tastes like. But I kept making it because it succeeded far beyond what even I expected. When you first lift the lid  off the pot, there’s this absolutely amazing puff of perfumed steam that’s worth it all by itself. But, wonder of wonders, that perfume doesn’t all escape in the puff: each grain carries it, even after refrigeration and reheating. 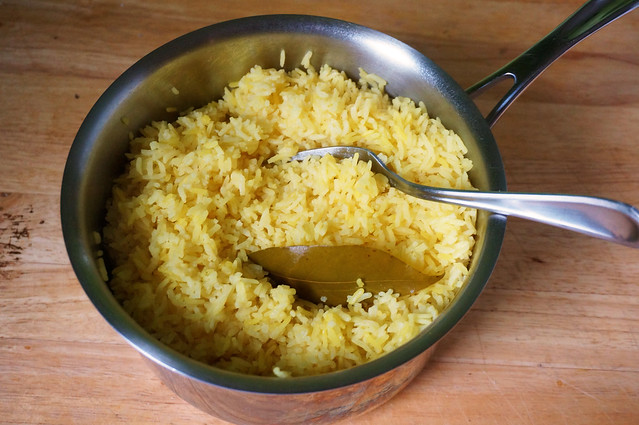 So: if you’re a true bay leaf believer, I know you’re not even reading anymore; you’ve already jumped down to the recipe. But if you’re a bay leaf conspiracy theorist, give it a try. I think you’ll be surprised by the power of that little gray-green leaf. 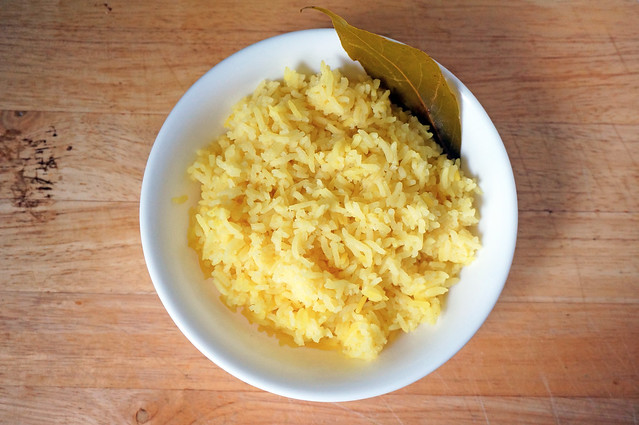 Bay leaves usually play a supporting role, lending complexity to more complex dishes. In this rice, though, they step into the spotlight, infusing plain white rice with a heady perfume. You can use this rice with most dishes, but it’s especially nice with herbaceous dishes that don’t have too much chile-heat so that the delicate bay leaf scent isn’t masked.

Rinse the rice in a fine-mesh strainer until the water runs mostly clear. (You can also do this by swishing it in a large bowl and draining, changing the water a few times.)

In a medium saucepan, bring to a boil the stock, water, salt, turmeric (if using), and bay.

Add the rinsed rice and return to a boil, then cover and reduce heat to very low. Cook for 20 minutes, until the liquid has been absorbed and small divots form in the surface of the rice.

Remove from heat and let stand for 10 minutes, covered, then fluff with a fork and serve.

This is almost a minimalist recipe as-is, but you can strip it down to absolute basics by omitting the stock and making this with three cups of water.

If you want to reinforce the pungency of the bay leaf, throw a few whole peppercorns in with the bay leaf — just a few; don’t overdo it.

One response to “Bay leaf rice”