Late summer is this sort of magical time, when culinary spheres begin to overlap in the most delightful ways. Stone fruits are at their height, herbs and peppers and tomatoes are overflowing the market bins, everything’s sun-drenched and flavored with warm, moist air. But at the same time, the chill begins to creep in overnight and potatoes, corn, and squashes all appear. It’s my favorite time of year, not only because it’s a welcome break from the beating sun of the dog days, but also because the flavor combinations get really neat. 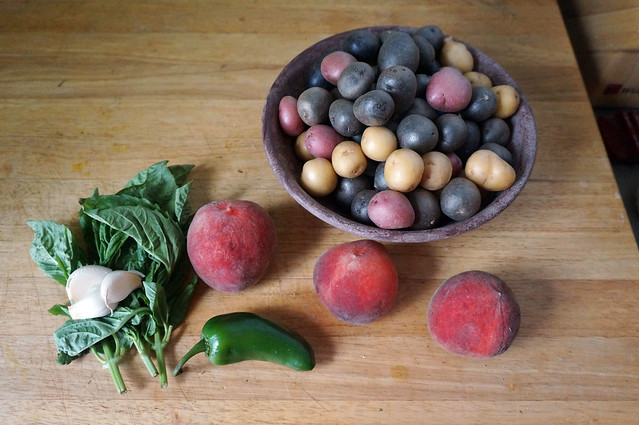 This is a recipe that’s just right for this cusp time. I’ve been making variations on it for years, ever since Food52 first published Spanish chef José Pizarro’s recipe for “Salt-Crusted Potatoes with Cilantro Mojo” back in 2013. And man, let me tell you: that’s a good recipe. Not surprising; Pizarro’s very well-respected. But because I’ve never been one to stick to the script, when I found myself with some of the first new potatoes and also a half-peck of peaches, I knew I was going to mess with the recipe. 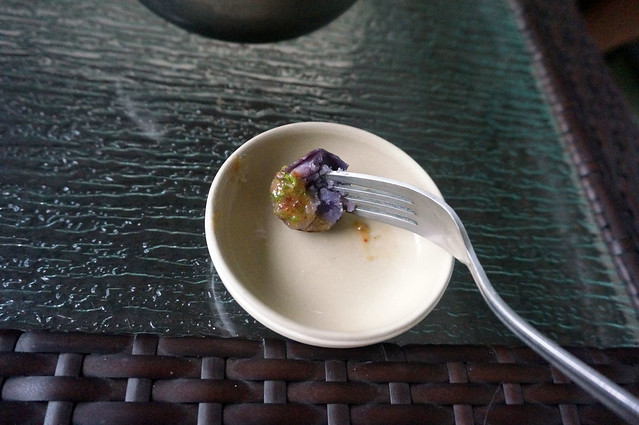 That’s admittedly a tricky thing, and something I think a lot about in writing this blog. I cook a lot of food that’s outside of my culture of origin: I love trying new things, surprising my palate with flavors and techniques that are new to me. I’m a firm believer in the importance of food as a means of intercultural communication and understanding: we learn about others through their food, in ways that are both enjoyable and profound. At the same time, though, I’m cognizant that my people (white Americans, broadly speaking) have a horrible tendency to take other people’s food and turn it upside down, without bothering to learn the first thing about it.

So let me tell you some of the things I’ve learned while mulling this recipe over for a couple weeks: Pizarro’s salt-crusted potatoes are an example of papas arrugadas, “wrinkly potatoes,” a specialty of the Canary Islands, where they were originally cooked in seawater, though now it’s often salted tap water as in Pizarro’s recipe and mine. Similar potatoes crop up elsewhere; notably, there’s a very similar technique used in Colombia’s papas saladas. There’s also the tradition of salt potatoes in Syracuse, New York, which originated with salt workers boiling potatoes for their lunch in the ever-present brine. 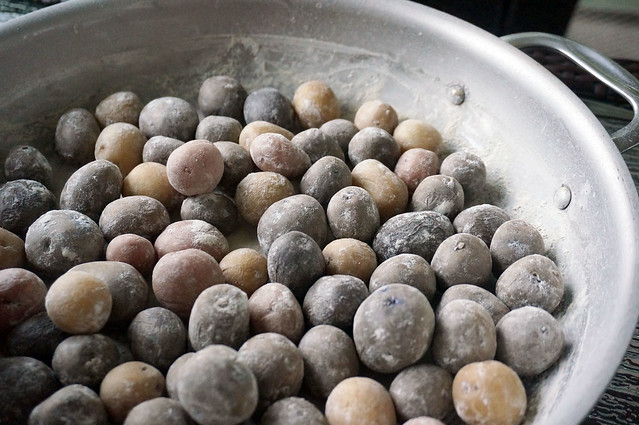 But the thing which would obviously pin Pizarro’s recipe to the Canary Islands is his sauce, a mix of chopped herbs, garlic, and peppers: a mojo. This sauce, too — or, really, a family of sauces with the same name — shows up throughout the Caribbean, thanks to Canarian immigrants to the region. The various mojos show a vast diversity, but there’s always a lot of garlic and olive oil, and usually a good dose of chopped herbs. 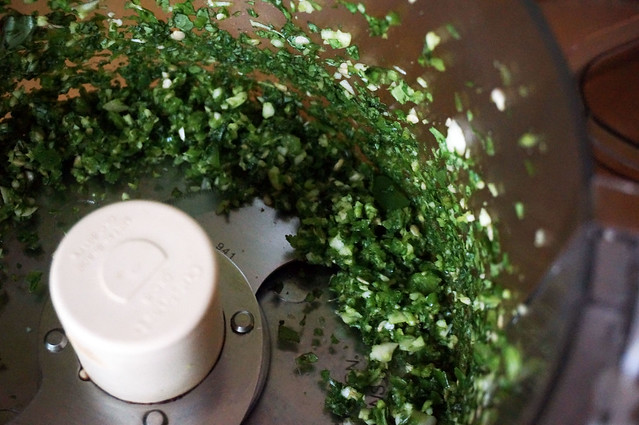 So those are the components we’re working with. And I’m not going to pretend as if I’m an expert in salty potatoes, or mojos — I’m barely a step beyond Wikipedia, if we’re being real. The diversity of mojos, though, is really interesting to me: in many ways, the sauce seems to adapt itself to local tastes and conditions. Now, I didn’t know that when I tossed peaches in a food processor with olive oil and vinegar. I just had a flavor profile in mind that I wanted to play with. But discovering it after the fact, and seeing the way cooks in the Caribbean use available ingredients to adapt existing form, makes me think of this sauce as a distant relative of those other sauces, rather than some deracinated, acultural thing that just popped out of my kitchen. 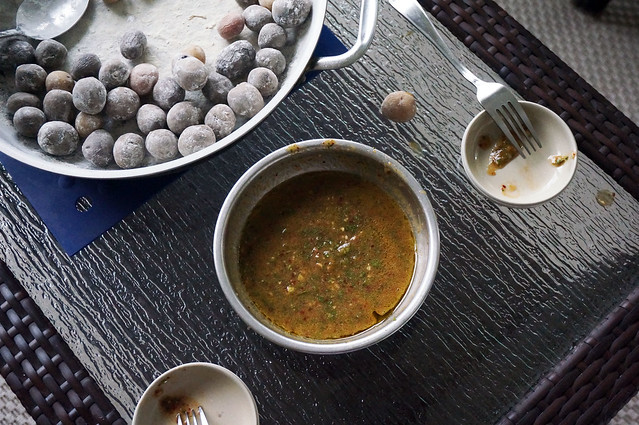 So that’s what we’re looking at here: Canarian potatoes as developed by a mainland Spanish chef, republished by an American website, adapted by a Texan cook in Ohio. I’m not calling these potatoes papas arrugadas, nor is their sauce a mojo — it would be dishonest and presumptive to claim that identity. But I am happy to know a bit more about the web of innovation and similarity that they’re a part of. 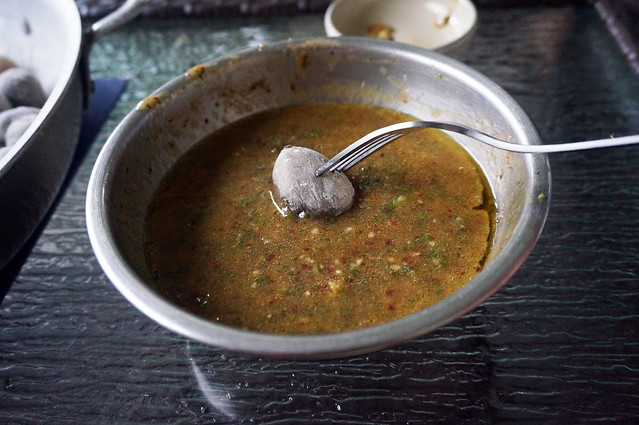 Cooking new potatoes directly in heavily salted water leaves them creamy on the inside and crispily salty on the outside. Combine that with a sauce that balances sharp garlic and vinegar against sweet peaches, leavened with aromatic herbs, and I’m in summer heaven.

Adapted from José Pizarro’s recipe for “Salt-Crusted Potatoes with Cilantro Mojo,” as published by Food52; originally from Spanish Flavors.

Use a large skillet, wide enough that the potatoes can fit in a single layer. Place potatoes, water, and salt in the skillet over high heat and bring to a boil. Continue boiling while you make the sauce.

To make the sauce, first combine the garlic, jalapeño, and basil in a food processor. Pulse a few times until everything is chopped, but not pureed. Scrape out and reserve, but do not clean the processor bowl. Combine peaches, olive oil, and vinegar in the processor and blitz until they make a smooth puree. Combine the peach puree and the chopped herb mixture to make the sauce. (I realize it seems fussy to do it separately, but the slight chunkiness of the herb mixture just feels better, and if you blitz it all together it can turn an unpleasant brown color.)

Continue boiling the potatoes until all the liquid evaporates. Once it has, reduce the heat to low and toss the potatoes lightly until the salt crystallizes and the potato skins wrinkle somewhat (a minute or two).

Serve hot or room temperature. Diners may wish to scrape some salt off before dipping and eating, but salt fiends like me will appreciate the delightful salt crust.

Once during testing I was out of basil, so subbed in cilantro (which is, in fact, the herb called for in José Pizarro’s recipe). Equally lovely, but the real magic happened when I combined half of that batch with half of a basil batch: the combo is a winner.

Peaches not looking so good? Nectarines would be just fine, and (though I haven’t tested this), I’d be very interested in a plum-based sauce, or even apricot if you can find good ones very fresh.

Yes of course increase the jalapeño, or sub in a hotter chile. As written, this is SUPER mild. Like, happy white Ohioans mild.

Leftover sauce? Don’t throw it out! Put it on everything, or use it as a salsa with chips.